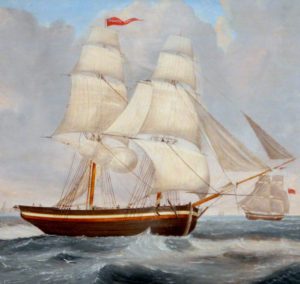 The 5th ship of the Canterbury Association arrived at Lyttelton on the 14th February 1851. She was a ship that didn’t have a smooth run from the beginning. She was forced back to Plymouth by bad weather after her first attempt to sail to New Zealand: – finally leaving England on the 18th October 1850 with 204 souls aboard.

When the Castle Eden reached Cape Town, the entire crew were arrested for mutinous behaviour. Once the crew were replaced, they were off at sea again with stores replenished and a number of new hands on deck, the Castle Eden was back on course. Due to alarming passenger reports, the second crew weren’t much better than the first, indulging heavily in the onboard rum.

The Castle Eden dropped anchor at Port Victoria, now known as Lyttelton Harbour 7 February 1851.
The crew were again arrested on arrival. Of course there were no prisons or courts – so some A-frame housing was used, where largely the inmates were trusted to stay put. Some were taken to Wellington to face a judge where others, it proved just not worth the funding for the journey to court. 17 members of the crew were to serve 14 days’ imprisonment for refusing to perform duties.

Despite all the troubles, 2 weddings were performed on board, and there were 3 births and 4 deaths during the voyage.

The Castle Eden last sailed in 1888 where she was wrecked on some rocks in the Red Sea. A following inquiry found the Captain at fault – in every way possible!