Treasures from the past: The First Four Ships

CANTABRIANS are familiar with observing Canterbury Anniversary on Show Weekend each year, coinciding with the agricultural and pastoral show which has been running since 1862.

However, that observance (the second Friday after the first Tuesday in November) has only been a convention since the late 1950s.
Prior to that, Canterbury’s anniversary was marked on December 16, the date that the first two of the fleet of four ships carrying the Canterbury Association settlers arrived at Lyttelton.

After a journey of approximately three and a half months from England, the Charlotte Jane was the first ship to arrive on the morning of December 16, 1850, followed closely by the Randolph that same afternoon. The Sir George Seymour arrived the next day and the Cressy on December 27.

These First Four Ships carried approximately 773 settlers;
a carefully selected cross section of society including colonists like James Fitzgerald, the first Superintendent of the Canterbury Province, the architect Benjamin Mountfort and others. Alongside them were 200 single men and women including domestic servants, carpenters, bricklayers, blacksmiths and a sole butcher.

In 1950, Lyttelton’s centennial celebrations were extensive; including but not limited to a special service blessed by the Archbishop of Canterbury, speedboat races, a commemorative walk, a sumptuous banquet and ball and the outfitting of a coal hulk the Darra to represent the Charlotte Jane which then took part in a reenactment of the pilgrim’s landing.

Ongoing celebrations took a terrible turn in January 1951 during the Canterbury Centennial Race from Wellington to Lyttelton. A huge southerly storm caused the demise of two yachts the Husky and the Argo and tragically, the loss of 10 crew.
George Brassell and a volunteer crew on the trawler MV Tawera saved six men off the yacht Astral; Brassell was awarded a Royal Humane Society gold medal for his dramatic rescue efforts.

For a number of years from the 1980s until 2010, an appropriate series of flags to mark the arrival of the Charlotte Jane were flown from the flagpole at the Timeball Station. Although the Timeball Station was not built until 1876, a flagstaff was positioned on the site as early as 1850 to give news of the arrival and movement of ships.
https://www.heritage.org.nz/places/places-to-visit/canterbury-region/lyttelton-timeball

At 8am a square red flag was flown on the southern yardarm, indicating that a sailing ship had been sighted off the heads. In 1850, this signal would have caused a flurry of excitement in the nascent port.
At 10.30am that red signal was rehoisted to the main mast of the flagpole, along with four flags representing the Charlotte Jane’s identification numbers.
At around 11am the red flag was replaced by the ship’s house flag, marking its safe arrival at
Officers Point (near the end of the modern cruise berth). 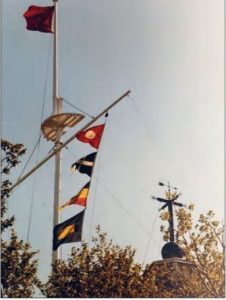 Flags of the Charlotte Jane and the timeball
MD Archbold 1982