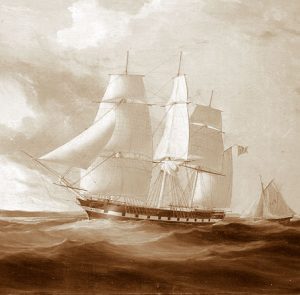 The Sir George Seymour, weighed anchor at Plymouth, about 11 o’clock, A.M. , on Sunday, Sept. 8 1850. She was the last, by several hours, to leave the shores of Old England. Her companions were all out of sight, and two out of the three were not seen again, till she met them in this harbour. Like the rest, she made an excellent run out of channel, and by the 13th was abreast of Cape Finisterre. On Sunday, the 15th, the passengers assembled, for the first time, for Divine worship, which was celebrated on the poop. All hands aft to rig the church, was a new sound to landsmen, but what church could be grander than that which had the sky for its roof, the ocean for its floor, and god himself for its architect. Great was the thankfulness of most, who, after a week of sickness and discomfort, were thus assembled together for the first time, to adore and praise him, who sitteth above the water floods. From that day forward, the morning and evening services of the church were celebrated, with occasional exceptions, throughout the voyage, and the Holy Communion was thrice administered, first, on Sunday Sept. 22nd, again, on Sunday, Oct. 20th, and lastly on Advent Sunday.

The weather, during the first part of the voyage, was very delightful. On Wednesday, the 18th, we had a beautiful view of Porto Santo, one of the Madeira group, Madeira itself being afterwards seen more dimly in the distance. On the same morning we were startled by an alarm of fire in the after hold, which, though it was speedily extinguished, was sufficient to cause a thrill of horror in the minds of most, succeeded by a feeling of thankfulness for being delivered from so great a peril. It was broad daylight, land was in sight, though at a distance, but, even if the lives of all had been spared, which could hardly have been expected, to have lost all, and landed on a foreign soil, had been a sad disaster. On the Friday following, we had a clear view, though at a very great distance, ( as much as 90 miles,) of the far famed peaks of Tenerife Palma, with its bold and rugged outline, and its many smoke wreaths, the signs of its industry and commence, divided with the lofty and majestic Peak, which stands as it were the mother of the group amongst her graceful offsprings, the interest of that lovely morning. Ferro, the southernmost of the Canaries, was in sight the following day.
On the 26th we passed St. Antonio, the westernmost of the Cape Verds, and from that time, we saw no land for eleven weeks, that which we next saw being a part of the beautiful coast of this our southern Britain. On the 4th of October, and incident occurred, which we must not pass over. A sail came in sight, which proved to be the Randolph. Nothing could have happened more fortunately, since it gave an opportunity to our friend Mr. Davy, to pass the rest of the voyage in his own ship. He had narrowly escaped missing his passage altogether, having arrived at Plymouth too late to embark on board the Randolph, and was with difficulty permitted to take his passage with us. An opportunity was now afforded, most unexpectedly, of putting him in possession of his own cabin, in his own ship. There was not one, it may safely be said, who was not sorry to lose him from amongst us, still we could not but congratulate him on the now probable recovery of his cabin and his outfit. The expectation was realized, a boat was lowered from the Randolph and the chief officer, and two clergymen, and some other passengers, came on board to visit us, and after a short stay, returned in company with our friend, who has thus succeeded in accomplishing a feat, more often talked of than performed, namely, that of sailing in two ships, an honour supposed to reserved only for the most distinguished personages. We sailed in company with our friends of the Randolph, for the two following days, and did not finally part with them till the Thursday following, Oct. 10.

On Saturday, Oct. 12, at about 10 p.m., we crossed the line, within five weeks of the day on which we left England. On the day following, the bodies of two infants, who had died the night before were committed to the deep, and here we must not omit to express our thankfulness that no death of any adult, and so little of anything like serious illness of accident occurred throughout the voyage.

From the line to the Cape, we make a splendid run. On the 23rd, in about the latitude of Rio Janeiro, we reached the westernmost point of our course, about 33 west longitude, and then first began to turn our faces in the direction of our new home. On Nov. 1st, we crossed the meridian of Greenwich, by the 5th we were abreast of the Cape. Though we experienced some rough weather about this time, and occasionally afterwards, yet all, we believe, whose first voyage this was, are agreeably disappointed in having escaped, in this respect, so much better than they had anticipated, and it must be a cold heart indeed, which would not feel thankful for the speedy and favourable voyage, which was granted to us. But little remains to be told. We passed about halfway between St. Paul’s and Desolation Island, on the 20th of November, making gradually southward, till on the 7th of December, we were nearly in the parallel 49°.

On Wednesday, the 11th, about 4 o’clock in the morning, we sighted Stewart’s Island, earlier, it appears than either the Charlotte Jane or the Randolph though on the same day with them, and 94 days from the time of leaving Plymouth. We are surely not presumptuous in viewing it as a signal proof of the divine blessing upon our undertaking, that three ships, starting at the same time, but not intentionally keeping together, and running indeed in very different tracks, and passing over so immense a space of ocean, and not coming in sight of one another (with the exception of the time abovementioned, when a special object was answered by the meeting) for the space of three months, should, at the end of that time, come in sight of the promised land on the same day. So nearly did three out of the four vessels which composed the ever to be remembered first Canterbury fleet arrive together, that the one of the three which came into the harbour last was the first to see the land, and that also was the one which had started last.
Few will ever forget the joyous excitement and flow of spirits which prevailed on that beautiful day when we first beheld the noble harbours and magnificent mountain peaks of the Southern Island of New Zealand, and on the following day, when we ran in so close, and almost longed to land on the lovely sea beach backed by the low cliffs, and again on the Sunday following when the snowy peaks of our own mountain range first became visible, and afterwards shone so grandly in the glorious sunset of that evening.
Monday and Tuesday were brilliant days, and it is impossible to describe the pleasure we derived as we passed along the eastern and northern coast of Banks’s Peninsula, descrying continually fresh beauties, recognizing spots known before by name, and comparing the veritable land itself with the maps with which we had been so long familiar.
And when at length Godley Head came into sight, and the harbour of Port Victoria opened before us, and when at length we entered, and sailed as it were into the bosom of its encircling hills, who was there that did not feel at the time that he could have gone through the fatigues of the whole voyage if it were only to enjoy the keen and pure gratification, and the life long memories of those few last days. The Sir George Seymour came to anchor about 10 o’clock on Tuesday, Dec. 17, 1850, being 100 days almost to the very hour from the time she left Plymouth.

A fire destroyed the Sir George Seymour in 1867. She was carrying a cargo of coal from Liverpool to Bombay when the cargo suffered spontaneous combustion on 18 December 1867 at 25°S 25°W. Her crew abandoned her. Leda, which was on her way to Calcutta, rescued 15 crew members.

Her entry in Lloyd’s Register for 1867 carried the annotation “[B]URNT”.