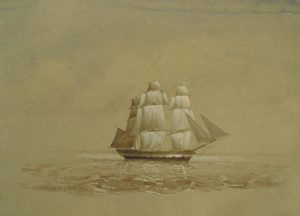 The Randolph, left Plymouth on the night of Saturday, Sept. 7, 1850, a few hours after the Charlotte Jane, having on board 217 passengers. The officers of the ship were Captain Dale, Commander, Mr. Scott, Chief Officer, Mr. Puckle and Mr. Willock, officiating ministers, and Mr. Earle, Surgeon Superintendent.

The Randolph spoke an unusually large number of vessels during the early part of the voyage, and on the fourth of October fell in with the Sir George Seymour, which had left Plymouth about 12 hours after her, bringing a passenger who had arrived at Plymouth after the sailing of the Randolph.

She was becalmed two days in company with a French Barque, having on board an operatic company who were proceeding to Mauritius. On the first day some of the Randolph’s passengers pulled to the French vessel, and invited a large party to dine with them, and on the second day they kept a promise exacted by their visitors on leaving the day before, by dining on board the Frenchman, the toast drinking on both sides was most amusing. A great deal of Italian music was sung in really first rate style. On the 6th of November, there was almost mutiny on board, which by the mercy of god was suppressed, through the promptness of the Captain, supported by his officers and the passengers. On the 25th, was performed Sheridan’s play of the‘Rivals’, the female characters being played by gentleman. The characterswere supported in a manner which gave universal satisfaction. To the ladies on board the greatest praise is due for the effective way in which the characters were ‘got up’, the wonder was where all the dresses could have come from, and it was very curious to hear what they were composed. The representation took place between decks before an overflowing audience, and a second performance was asked for by many who were unable to gain admittance.

There were 5 deaths, all children, and 9 births on board. The voyage is declared, by common consent, to have been most agreeable, the only unpleasant part of it being that which passed in the low latitudes between the Cape and New Zealand, on account of the cold and fog, which proved fatal to almost all the game on board.

The Lyttelton Times September 20, 1851
The ship “Randolph“, Dale, commander, from Madras, bound to London, via Mauritius, was lost on  25 June, on a reef off Amber Island (Mapon).  She had on board a cargo of sugar of London, a large amount of money, and 254 Indian emigrants, for Port Louis. Nothing belonging to the vessel could be saved.  Mr. Scott, an officer of the Madras Army, swam on shore, but died a moment after reaching it from exhaustion. Two European sailors, nine men (immigrants), ten women and three children were drowned.  The remains of Mr Scott were interred with military honours, the garrison following the funeral.

Sett’st as thou wert wont to do,
Old fount of light?
Bathing with familiar hue
Tree, and dale, and height?

Casting still old England’s shades,
Thou art ay the same;
If on land the vision fades,
The be our’s the blame.

Grand old friend! thou shinest still,
Guiding to the work;
To the steadfast mind, and will
Never dim or mirk.

Glorious type! of old fond ties
Fate may have bereft us;
Paint thou with unfading dyes
GOD HATH NOT LEFT US!