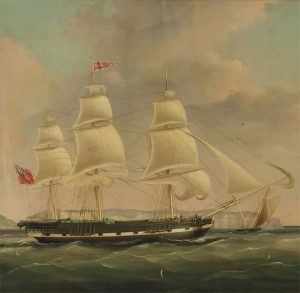 Published in the Lyttelton Times 8 March 1851

The “Isabella Hercus” arrived on Saturday evening. She brings 25 cabin, 16 forecabin, and 107 steerage passengers. She has had a tolerable quick, and we are told, a very comfortable voyage. Her passengers are nearly all landed and, with one or two exceptions, in good health.

Suicide Onboard
For Ann Freckingham of the ‘Isabella Hercus’, traveling alone to the end of the world proved to be too much.
In the darkness surrounding her bunk, she tied string around her throat three times and strangled herself.  As she gasped and moaned, the others resting close by just thought she was having a nightmare.  At 9 the next morning, the discovery was made.  Ann was only 25 years old.

To avoid upsetting other passengers, she had been taken quickly up to the deck, sewn into a hammock and tossed overboard.  The other single women who shared the living space with Ann stated that she had become quite withdrawn and just spoke over and over that she ‘should never reach New Zealand.’  She had wept about a man she loved back in England and had a heart disorder that had been getting worse with the oncoming heat of being near the Equator.

The Isabella Hercus en route from Jamaica to London loaded with sugar, was wrecked on the Colorado Reef in Cuba on 27 February 1871.