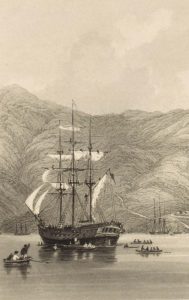 On the 10th she was almost clear of the Bay of Biscay, the nearest land being Corunna – the antipodes of Lyttelton – but far from her. Five days of very light winds succeeded, and on the 18th we made Madeira, and passed to the westward of it; on the 20th made Palma and Teneriffe; on the morning of the 26th made S. Antonio, passed to W. of all the islands, and ran as far as 26, 26 W. We had no N.E. trades; and on the 30th, after crossing the parallel of 10 N., met a breeze from the southward, were fifteen days beating against it and at length crossed the line in about 25 W. The S.E. trade came more and more from the eastward, and the extreme westing of the ship was 32. 54 on the 24th October, in lat. 20. 51S. For five days made a course nearly due S., then began to make some easting with strong and fair winds. We passed above 60° to the N. of Tristan d’Acunha, sighting the snowy summit of the mountain over the clouds on November 6. From the 3rd to the 8th made little way, and then commenced a good run. From Nov. 9 to Dec. 5 ran down 100 degrees of longitude between the parallels of 37.30 and 40 S., passing about six miles to the southward of St. Paul’s on Dec. 1.

Made Cape Molyneux, on the 24th, stood out for Bank’s Peninsula, and at last anchored in Port Victoria before noon on the 27th of December, being 110 days from Plymouth Sound. The fore-top-mast having been badly sprung S. of the Cape will account in a great measure for the length of the passage; no confidence could be placed in it; the fore-topsail was reefed whenever the breeze freshened. The ship has now landed 200 emigrants; more than 90 children had embarked in her, but two who were brought aboard in a most sickly state did not survive many days. One child was born as we entered the Pacific. During the greater part of the passage it was necessary to watch one gentleman and keep him under constant restraint, his mind being evidently deranged, and he has been safely landed, as we would fain hope, in a better state of mind.

Such is a rough sketch of the “Cressy’s” passage, and the melancholy event which cast a gloom over our little party. The details of many incidents, which are faithfully recorded in the “Cressy Times,” would have little interest for the general reader We were dull at Gravesend; the dinner given to the emigrants was followed by too many partying scenes to allow any merriment, and it was with gloomy thoughts and low spirits that one passenger took possession of a comfortable cabin aboard the “Cressy”. But when the ship dropped anchor down the river, the feeling of being afloat had its usual exhilarating influence; the ties of Old England were forgotten by the least sanguine, as they cherished the prospect of a better country; and if a thought of home would occasionally return there was little time for these contending emotions. One new feeling soon absorbed all others. We rounded the N. Foreland, and sentiment gave way to sea-sickness. What a spectacle does an emigrant-ship present on such occasions, and how particularly dismal was the “Cressy” with her youthful family of ninety! But the distress was temporary. In a few days after touching at Plymouth we were on the broad Atlantic, with the wonders of the ocean before us, and a few, if any, of our passengers viewed them with indifference.

We passed near Madeira in most lovely weather, and were equally fortunate off the Canaries, having a clear view of the distant peak. On the 30th a boat from the H.M. brig, “Mariner,” boarded us and took our letters home.

In a few days the Bank-agent**, who had been the mostly lively guest at the cuddy-table shewed great excitement, and a fixed antipathy to one of the passengers. On Oct. 9, it became necessary to secure him, and for some weeks was watched by his fellow passengers. As he became less violent, his wife was able to stay with him, and under her control he has become quiet. But one feeling of sympathy exists for the lady under so sudden and awful visitation. We had little merriment to welcome Neptune when we crossed the line, but fair winds in the south latitudes soon put us in good humour with our vessel. All became nautical, and the passenger who did not know the ship’s longitude, and the distance run daily, was viewed with some contempt by his companions. We had sights of the sun nearly every day until we neared our new country, but thick weather, when we most needed a clear sky, for two successive days, a bad specimen for of our future climate. How wretched was the longest day! Then how variable the weather-reefed topsails at nine, the ship becalmed at noon ! in short we took the English privilege of a ‘good growl.’ But we had reason to be most thankful for the escape of a midshipman, who fell overboard when a high sea was running. A boat was lowered, and he was picked up a long way astern; we did not know that he had been saved, until we saw him nearly lifeless in the boat on its return. We spent Christmas day most pleasantly at sea, and on the 27th came into Port Victoria with as good grace as the last in a race can shew to his competitors.

Two circumstances may have contributed to preserve the general health on board the “Cressy.” The ship was not becalmed in the tropics, and in the hottest part of the world the foul breeze which delayed her was too strong to allow any great heat to be felt on board. Again, the captain deserves our thanks for consulting the health and comfort of his passengers in not running further southward, when a shorter passage might have been made in colder latitudes.

** Those aboard the ‘Cressy’ had witnessed fellow passenger Quinton Gale ‘go quite mad’ as their ship also approached the Equator.  After attacking his new wife, Quinton had to be restrained for the rest of the journey.  Once in Lyttelton, all the Association’s doctors had a look at him and concluded that with all the pressures of his quickie marriage, the actual voyage, his new job as Christchurch’s first Bank Manager and a ‘inflammation in the eyes that had spread to his brain’ had been the reasons for his cheese sliding off his cracker.  Quinton never quite recovered but in his later years, it was reported that he was always good humoured, enjoyed having visitors and seemed happy enough to spend his days beside his incredibly understanding, loyal wife!