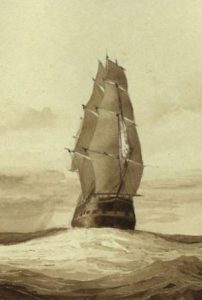 The Charlotte Jane, Capt. Alexander Lawrence, Commander, left Plymouth sound at midnight on Saturday the 7th of September. She sighted Stewart’s Island on Wednesday, the 11th of December, and cast anchor off Port Lyttelton on Monday the 16th of December, at 10 o’clock, thus making her passage in 93 days from land to land, or 99 days form port to port. She carried 26 chief cabin, 19 intermediate and 80 steerage passengers. The Rev. Mr. Kingdon, Chaplain, Alfred Barker, Esq., Surgeon Superintendent.

During the voyage, the usual domestic occurrences of an emigrant ship then occurred, of births 1, marriages 1 and deaths 3, the last being cases of very young children who embarked with the seal of death on their foreheads, one even died before the ship took her departure, and was buried on shore at Plymouth.

The course of the Charlotte Jane lay inside the Madeira and Canary Islands lay inside the Madeira and Canary Islands. She sighted Porto Santo, one of the Madeiras, on the 17th of September, and on the 19th, Teneriffe and Palma, steering close to the latter. Here she met the N. E. Trades, which gave her but feeble assistance, and left her in about lat. 18 degrees north. Her course was then south-easterly, and in about 6 degrees north, she was driven by currents and foul winds to the eastward as far as long 16 west. Here she met a N.W. wind, under which she again stood to the southward, crossing the line on the 9th October, in long. 19 degrees west.

In lat. 2 28’, she entered the S. E. trades, which carried her rapidly over 20 degrees of latitude. On the 12th of October, she spoke the Zeno of Richmond, U.S., from Benguela to New York, and sent letters to England. Her course then was speedily run southward and south easterly. On the 29th of October nearing Tristan d’ Acunha, she made 250 miles in the 24 hours, the largest day’s run during voyage. From Tristan d’ Acunha, which to the disappointment of many she did not approach near enough to sight, she steered S. S. E., with a fresh N.W. wind and crossed the meridian of Greenwich on the 29th of October. South eastward still to Desolation Island with strong gales, a dreary drive of three weeks in cold and rain, with no perceptible change in the sea, the sky, or the Cape pigeons in the wake. Desolation Island passed, she encountered the first foul wind from the eastward, and ran south bearing up again, she ran beautifully on promising a rapid passage, till the 110th degree of east long.
Here for a week E. and N. E. winds prevailed, and drove her to the southward, not only out of her course, but to the extreme cold of lat. 52 26’ the furthest point of the southing reached. Here bets which had previously been freely given in favour of 95 days and 98 days from port to port, were now freely taken about 105, 110 or even 120 days, she being then 88 days out. However the wind soon changed, and after a splendid run abreast of the Australian coast she at last made the land in the afternoon of the 11th of December. Passing close inside the ‘traps’ she was becalmed and baffled for four days on the coast, giving the delighted passengers, as she stood off and on, glimpses of the coast at Foveaux Straits, Molyneux and Taieri Rivers, Otago and Banks Peninsula.

On Monday morning early she stood into Port Victoria, and earned the proud distinction of being the first ship to land emigrants on the shores of the Canterbury Settlement.

From hence forward the age of the Colony will be described as dating from the arrival of the Charlotte Jane.

Little need be said beyond this sketch of the ships course to describe the voyage. The passengers had their share of the manifold discomforts which go to make a sea voyage a bye word for discomfort. Extreme heat, and extreme cold, confinement and ennui, are the lot of every Australasian voyager. But whether it was that with this courageous little band a spirit of hope prophesied better things beyond, or the colonist spirit of resolution was strong, disregarding petty present evils, while greater menaced at a distance:- or whether it was that the unceasing attention to the wants of all, which characterised the management of the Charlotte Jane, smoothed everything, it may be safely said that by no party of passengers have discomforts been more patiently endured, by none more easily forgotten.

Of amusements, two manuscript newspapers, or weekly magazines, “The Cockroach”, and “The Sea-pie”, conducted with much spirit and ability afforded a fund throughout. The wonders of the deep, as they successively presented themselves, were unfailing in interest and delight, interpreted as they were by an enthusiastic naturalist, the excellent surgeon superintendent.
Then there was the maritime, if not manly game of shuffle katy, the foil and single stick, the piano and the song, and during the fine weather the light fantastic toe. At one time a passion for building model Colonial houses animated the ship, designs and models were in every one’s hands, and the subject on everyone’s lip, at another, ship building was in vogue, and craft designed on the most courageously ingenious principles, to supersede all existing theories, were modelled, and calmly lectured on. Thus, as probably with every ship that makes the voyage, time flew rapidly away, anxious and more anxious grew impatient the expectations of the land sick passengers. At last the breeze became softer, and to the sanguine seemed to smell of land, and one afternoon while all were eager on the look out, the loom was seen by several at once. New Zealand was made, and the voyage was done.

The only general observation that occurs to us as suggested by the voyage is that of pronouncing it highly injudicious for emigrant vessels to run so far to the southward as the latitude in which the Charlotte Jane made her east course. The temptation of thus gaining a rapid passage is doubtless very great, but the utmost speed cannot compensate to poor emigrants for the miseries thereby inflicted on them. It is almost impossible on board ship to escape from cold, and from rain and spray, the only refuge is by huddling under hatches in dirt and darkness. The beds can never be properly aired on deck, and this single consideration should be sufficient to induce the authorities at home to prescribe a rule on the subject. A grievous loss to the colony was in this instance caused by the extreme cold to which the ship was exposed, out of six couple of partridges and four couple of pheasants which up to that time had continued healthy and lively, only one couple of pheasants and one partridge survived the damp and dreary climate of Desolation Island.
Our excellent Captain, in this instance, tried the southern passage, having a comfortable and not over crowded vessel, and succeeded in accomplishing a rapid passage, but in his own opinion, the preferable course for emigrant ships bound for Lyttelton would be along the latitude of Bass’s Straits, through Cook’s Straits, and down the coast with the prevailing north east wind. Very few more years will set the question at rest for ever.

THE NIGHT-WATCH SONG OF THE “CHARLOTTE JANE”

First sadly bow the head, brothers,
In silence o’er the wine,
To the memory of the dead, brothers,
The fathers of our line.
Though their tombs may not receive us,
Far o’er the ocean blue,
Their spirits ne’er shall us,
In the land we are going to.

Whilst yet sad memories move us,
A second cup we’ll drain,
To the manly hearts that love us,
In our old homes o’er the main.
Fond arms that used to caress us,
Sweet smiles from eyes of blue,
Lips that no more may bless us,
In the land we are going to.

But away with sorrow now, brothers,
Fill the wine-cup to the brim!
Here’s to all who’ll swear the vow, brothers,
Of this our midnight hymn:
That each man shall be a brother,
Who has joined our gallant crew:
That we’ll stand by one another,
In the worlds we are going to.

Fill again, before we part, brothers,
Fill the deepest draught of all,
To the loved ones of our hearts, brothers,
Who reward and share out toil.
From husbands and from brothers,
All honour be their due,
The noble maids and mothers,
Of the land we are going to.