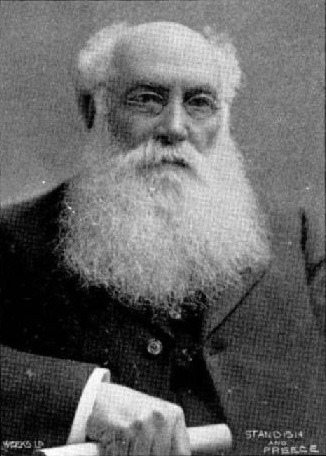 Samuel Charles Farr (1827 – 14 July 1918) was a 19th-century builder and architect in Christchurch, New Zealand. He intended to emigrate from England to Auckland, but significant shipping problems saw him end up in Akaroa in 1850 instead. From 1862, he lived in Christchurch.
Farr has a number of firsts against his name: the first marriage in Canterbury (Mary Ann Pavitt), he designed Akaroa’s first church, designed New Zealand’s first iron verandahs, and he started Sunday schools in Canterbury. As a leading member of the Acclimatisation Society, he stocked almost every lake and river in Canterbury with fish and was instrumental in introducing the bumblebee to New Zealand. His most notable building is Cranmer Court, the former Normal School, in the Christchurch Central City; which was demolished following the February 2011 Christchurch earthquake.

Old Mr. Farr spoke about his wedding plans to a Press representative in 1910.
First Wedding in Canterbury.

SIXTY YEARS AGO. Mr and Mrs S. C. Farr, of Christchurch, were married on June 15th, 1850, and celebrated their diamond wedding last week. More than interest attaches to this incident, for the wedding of the aged pair, still hale and hearty, was the first celebrated in Canterbury. Speaking to a Press representative, old Mr Farr said: “We both arrived in the Monarch at Akaroa on April 2, 1850. We saw no chance of getting married at the time, as there was no minister in the district. There waß a magistrate, but ho could not marry us. Then the magistrate came to my house une morning in June and said: ‘I have received notice this morning that I am appointed Registrar of Births, Deaths and Marriages. If you will come up to my place and see me we will get it all fixed up’; So I went up and got the arrangements made. Nine days’ notice of the marrage had to be given, and the notice had to be posted in a public place. ‘I don’t think there ie a more public place than my back door, said the magistrate. ‘The constable comes up every morning, and he will see it.’ The notice was then written out and posted on the back door. Nine days passed away, and we went’ up to the magistrate’s house to be married. It was a terrible day—a sou’wester was raging a hurricane, and it was pouring. When we got near the magistrate’s house, I could see him sitting near a French casement. When I knocked he turned round, and his remark indicated his nationality: ‘Bedad, Farr, I didn’t think you would come up on a morning like this.’ I said that we could not put off this business. ‘Come In, he said, ‘and I’ll soon settle you. This was his first wedding, and he had to look up the book of instructions to see what he had to do. ‘Did you bring a ring?’ he asked. I produced one, and explained that I had made it from a sovereign for the occasion. We went through the ceremony —the usual registrar’s ceremony, I suppose—and he wished us every happiness. This was the first wedding in Canterbury, and took place just about a month before the province was gazetted. Our names stand first in the registrar’s book, which lam told, may be seen in Wellington now.”