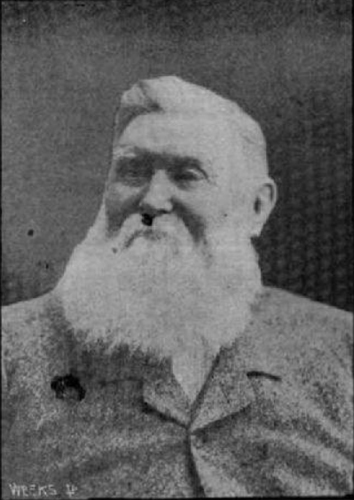 MR. JOHN MADDISON, of “Barnwell,” Sockburn, was born in Northamptonshire, England. He arrived in Melbourne, Victoria, in 1852, but left for New Zealand at the end of the following year. In the beginning of 1854 he settled in Canterbury and took up a section of thirty acres at Riccarton, where he farmed his land and also worked throughout the district. On the discovery of gold in Otago Mr. Maddison sold his farm and hastened to the goldfields. After a short time spent without successful results on the fields, he returned to Canterbury and resumed farming.

Mr. Maddison bought Strange’s run on the banks of the river Selwyn. This estate contanied 2714 acres, and was under the management of his son. About 1898 Mr. Maddison retired from the active management of his properties, and lead a life of ease at his villa in Sockburn. Mr. Maddison was one of the first members of the Templeton Road Board, and was a member of the school committee, and a vestryman.

He has been twice married, and had; nine children that were born by his first, and three by his second wife.