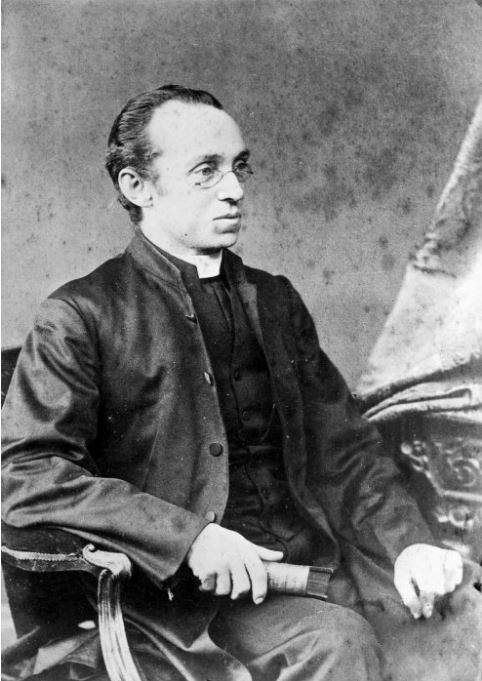 John Joseph Grimes was the first Catholic bishop of Christchurch, New Zealand, being appointed on 13 May 1887 and dying in office on 15 March 1915. He was born John Grimes at Bromley in the East End of London, England, on 11 February 1842. His parents were Richard Grimes and his wife, Elizabeth Calnan (also variously given as Calding or Canning). His father was a seaman and both parents were illiterate; nothing further is known about his family background.

John was educated at the Marist brothers’ school in Spitalfields, London, and the college of St Joseph at Bar-le-Duc in eastern France. In September 1861 he began training for the priesthood at St Mary’s College, Dundalk, Ireland, and was professed as a Marist on 29 April 1867. He was ordained priest on 22 August 1869 in the church of the Catholic University of Ireland, Dublin.

After ordination he taught at St Mary’s College until 1874 when he was appointed to Jefferson College, Louisiana, in the United States, becoming the college’s president in 1879. After a severe bout of yellow fever, in 1881 he was repatriated to the staff of the Marist scholasticate and novitiate newly established at Paignton, Devon. From this post he ministered to Catholics in nearby Brixham.

In 1885 Grimes was the Society of Mary’s nominee for the post of bishop of the proposed new diocese of Christchurch, New Zealand. This was to be formed by removing Canterbury, Westland, a section of south-west Nelson and the Chatham Islands from the Wellington diocese. Catholics in the area were mostly of Irish background, and church authorities in Ireland and Australia opposed Grimes’s appointment; they considered the new diocese would be better served by an Irishman from secular clergy than by an English Marist. However, Rome opted for Grimes. Pope Leo XIII created the new diocese of Christchurch on 10 May 1887, and three days later preconised Grimes as its first bishop. He was consecrated bishop at St Anne’s Church, Spitalfields, on 26 July 1887.

Grimes arrived in Christchurch on 2 February 1888; the welcome he received reflected the people’s pride in having their own bishop rather than love for Grimes, who had been preceded by a poor press. But as he completed a vigorous visitation of his diocese he earned respect and loyalty. Yellow fever had weakened his health, and within two years of his arrival he was critically ill. It was typical of his resilience that he turned the convalescent voyage to Europe into an official visit to Rome, and made his return journey a fact-finding tour of North America.

His welcome back to Christchurch in September 1891 was a demonstration of affection in contrast to the formal courtesy of his first reception. During his nearly 28 years as bishop he suffered further bouts of sickness, but these did not detract from his effectiveness. On the occasion of his silver jubilee as bishop in 1912 he was invested with several ecclesiastical honours in recognition of his achievements for the diocese.

Grimes worked hard to build unity in his diocese, which was divided not only by the Southern Alps, but also by class, national loyalties and political opinion. The highlight of this endeavour was the diocesan synod he convoked in January 1893. A good administrator, he did not let desk work predominate over pastoral zeal; as occasion allowed he preached missions as part of his regular parish visitation. He was an able preacher, with precise diction and a neutral accent that gave no hint of his East London upbringing. At the time of his arrival the Maori population of the South Island was at its lowest ebb, and Grimes did what he could to provide some pastoral care for the small pockets of Catholic Maori who remained from the converts made between 1840 and 1860. The prominent part he took in civic and inter-church affairs helped break down inherited antagonism between Catholic Irish and Protestant English.

Grimes supported the establishment of parish schools. This entailed recruitment of religious brothers and sisters to staff the schools. He pressured the Society of Mary to undertake its long-postponed secondary school for boys, and St Bede’s Collegiate School opened in 1911. The sacrifices he asked the Catholic community to make in order to provide its own schools did not deter him from presenting it with other social needs to be met. In July 1888 Grimes opened the Magdalen Asylum, a women’s home, and fostered its further development. In 1910 at his invitation the first stage of Nazareth House, an orphanage and home for the elderly, was opened. This was followed in 1914 by Lewisham (later Calvary) hospital. Within a year Grimes was one of its patients. He was transferred to Lewisham Hospital, Sydney, where he died. His body was brought back to Christchurch and buried in a side-chapel of his cathedral on 25 March 1915.

Grimes’s essential work was to consolidate, develop and organise what had been established in the pioneering era. During his episcopate new parochial districts were formed; 30 churches were built or enlarged; and 15 presbyteries, 9 schools, 10 convents, and 3 residences for Marist brothers were constructed.

The Cathedral of the Blessed Sacrament, designed by F. W. Petre, remains Grimes’s monument and one of the finest churches in Australasia. In 1899 he returned from a visit to Rome fortified by the pope’s support for the project. The story of its building encapsulates the best and worst of John Joseph Grimes: it reveals his sustained determination and drive to carry the project through; his resilience in the face of setbacks; his love of reverent and precise liturgical ceremony; his vision of the role of the church in society; his hope that his largely Irish flock would grow out of its deprived beginnings to take its place at all levels of society; and his pride in his people’s achievements. In contrast it also reveals his peevishness when things went wrong; occasions of pettiness in financial management; and incidents of riding roughshod over the opinions of both clergy and laity when they offered advice or criticism. The foundation stone was laid on 10 February 1901, and the cathedral opened on 12 February 1905.