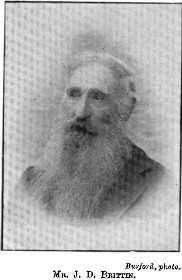 John Danns (Jack) BRITTIN was born in 1817 in St Ives, Huntingdonshire, England to Henry John and Mary Ann BRITTIN. He married Mary Anne MARSH in 1840 and they had 5 children – Annie, Mary Ada, Brittain, Miranda Agnes and Frances Isoline. Annie, Mary Ada and Brittain were born in England and made the voyage with them.

On the 2 Feb 1853 John and his family arrived in Timaru on the ship the ‘Minerva’. Two years later, in 1855, Jack lists his residence as being ‘Dry Bush near Lyttelton, Canterbury’ and his occupation was ‘stockowner’.

In 1862 two years after the birth of Miranda Agnes, the family were living in Newbury and had ‘Run 49’ about 400 acres on the Opihi River which was registered under John’s name. He continued to farm there until 1881 when he retired and moved to Pleasant Point, South Canterbury.

In the electoral Roll for 1900 John is listed as living in ‘Point, Geraldine, Canterbury. He was continuing to farm from his home (the records are incorrect as they should have stated his home as being in Pleasant Point not Point) and kept up his interests in horse racing (where he was considered a ‘gentleman rider’) and taxidermy. During his lifetime he put together a large collection as well as teaching other family members to taxidermy.

John Danns died on the 4th of November 1905 and six years later on the 5th of June 1911 his wife Mary Ann also died. They are both buried in the Old Settlers Cemetery, Dannevirke, New Zealand. 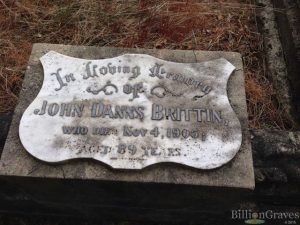 In 1993 a ‘BRITTIN’ family reunion was held for the descendants of John and Mary during which a memorial plaque was unveiled commemorating their arrival in Timaru on 1853. 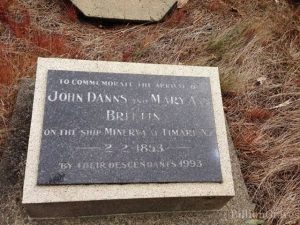