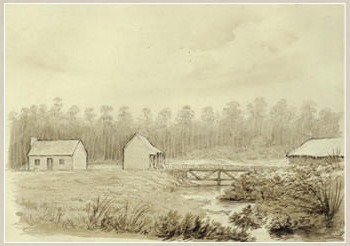 Riccarton 1851. James Edward FitzGerald’s sepia watercolour “Residence of John Deans Esq. taken from the East”.
The Deans brothers, John and William, had established their farm at Riccarton, on the future site of Christchurch, in 1843. Both Charlotte and her husband John Robert Godley liked the brothers. Charlotte wrote of John Deans (in a private letter to her mother), ‘He is a remarkably intelligent and good-natured Scotch farmer even rather nice-looking: well-dressed, with a natural good manner that is quite gentlemanlike, and no one can be more hospitable to all comers’.

William drowned in August 1851, when the barque “Maria”, attempting to enter Wellington Harbour ‘in a tremendous gale’, struck a rock and broke up, with almost total loss of life. Charlotte recorded: ‘Poor Mr Deans is a great loss here. Not only from his unfailing kindness and good nature, but also from the assistance that his advice and example, in all agricultural matters, gave to the newcomers.’

When the Godleys lived for a time in 1852, at ‘Riccarton’ in ‘Mr Deans’ hut’, during John Deans’ absence in Scotland, it was in none of the buildings in this watercolour, but instead in the hut (tiny house) built for the ploughman, and which burnt to the ground during the Godleys’ stay.