On board an Immigrant Ship

What would life be like on board an immigrant ship headed for a new life in New Zealand in 1850?

There were 2 classes of accommodation on board: steerage and cabin

Some immigrants paid for their own passages, but many had their fares paid by companies or the government.
They travelled in steerage. This was a space with a low ceiling below the main deck.

Those paying their own way were usually in ‘second’ or ‘intermediate’ cabins, or in a saloon cabin, at the stern.
In 1866 the cheapest cabin fare was more than three times that of steerage. Steerage passengers generally outnumbered those in the cabins by 10 to 1.

The conditions in steerage were bad. It was a horrible place between decks, and there were so many people in such small a space.
Steerage passengers slept in tiers of bunks. They were provided with mattresses, but no bedding. Bunk space was cramped, and tables and forms occupied the spaces between the bunks. There were no portholes, it was too dark to read and the air was very stuffy. A family of six would sleep in a space that measured 1.8 by 2.4 metres. 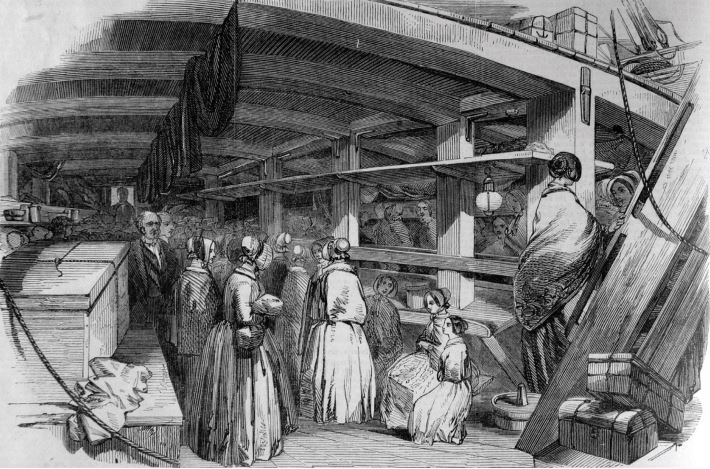 A lithograph of steerage passengers between decks on board an immigrant ship. The London Illustrated News. 17 August 1850.
Canterbury Museum 1949.136.2