Monthly Meetings
On the 3rd Sunday of each month* we either enjoy an outing to a destination of historical interest around Canterbury or listen to a guest speaker, after a brief meeting. Our meetings are held from 2pm to 4pm at the Knights Stream School, 1 Killarney St, Halswell. [see map]

*Depending on public holidays. Occasionally changed to suit. 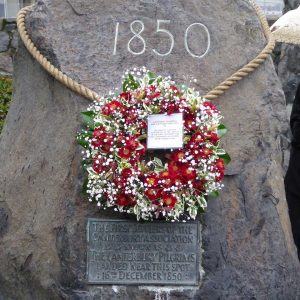 History of Pilgrims Rock
The Pilgrims’ Landing Site has high historical and social significance as it marks the place where the first Canterbury Association settlers landed with the arrival of the first of the ‘First Four Ships’, the Charlotte Jane, in Lyttelton Harbour on 16 December 1850.

The Canterbury Pilgrims’ Association was formed in 1923 and suggested the idea of the rock.
The rock was unveiled in 1934 by Sir Heaton Rhodes and dedicated by the Rev. F. Guise Brittan.
The rock was moved in 1990 to what is considered to be a more accurate location, at the land end of the jetty that was build for the settlers to come ashore.

** Date and time to be confirmed. Check here or on our Facebook page.