J E Fitzgerald sepia watercolour “View taken from the terrace in front of Mr FitzGerald’s House at Lyttelton. The home in the center is Mr Ward’s in Quail Island, Nov 15 1852.” Executed for the valedictory gift to John Robert Godley. 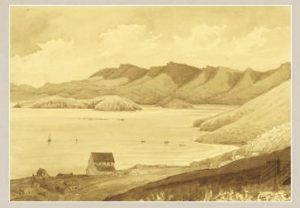 View taken from the terrace in front of Mr FitzGerald’s House at Lyttelton. The home in the center (sic) is Mr Ward’s in Quail Island, Nov 15 1852.

This is the first of seventeen extraordinary watercolours, ‘extraordinary’ for the nature of their production within the space of three weeks and covering hundreds of miles on horseback. Over the following three days (16-18 Nov.) FitzGerald galloped off to Banks Peninsula to produce another six: of Port Albert (Port Levy); Pigeon Bay, of Akaroa Harbour and of Akaroa itself. (These seven watercolours recorded ‘stations’ of the happy journey that the Godleys had made the year before.)

Nine days later, FitzGerald set out up country for the area of Mt Torlesse to record a journey Godley had made six months earlier to the same spot. With typical zeal, FitzGerald rode and walked long distances and climbed precarious heights to record such scenes of Canterbury that were particularly relevant to Godley.

In the foreground of this Fitzgerald watercolour is the first part of the Church of the Most Holy Trinity (demolished a few years later as the under-seasoned timber had warped and caused the building to sway in high winds). Capt. Joseph Thomas, when choosing the names of Canterbury Association members for certain Canterbury’s rivers, lakes, mountains, bays etc. named Quail Island ‘Gleig Island’ after the Revd Gleig, but the name did not pass into common usage as many other members’ names have done: those of Sumner, Ellesmere, Lincoln, Wilberforce, Coleridge, Lyttelton, Ashley, Courtenay, Farquhar, Heathcote, Adderley, Charteris, Somers, Godley, Halswell, Hawkins, Hinds, Hutt, Talbot, Torlesse, Forsyth, Wakefield, Harewood, Herbert, Ashburton, Cust, Cavendish, Alford, Mandeville, Eyre, Rickards, Simeon, Vernon, Kimberley and Wynne (named after Charlotte Godley’s brother).