On the 27th March 1848, the day the Canterbury Association was founded, the dream that was to become Christchurch was born.  Although at the time, the Port Cooper (Canterbury) Plains was just one of the options, by the month of December, it was almost a certainty. 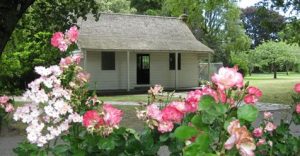 All throughout 1848, Canterbury Association surveyors began to replace The New Zealand Company agents – some now remembered as street names and other Canterbury places – walking and working the plains.  As the Deans farm at Putaringamotu (Riccarton) was the only tamed part of the future city, surveyors were a constant visitor to the Deans Cottage.  The Deans brothers did everything in their power to assist.

On the 25th December, Christchurch had its first Christmas Day.  On the newly named Canterbury Plains, 9 people (maybe the only people on the plains that day) crowded into the Deans Cottage to make the most of the day.  It seemed no one had a problem with getting into the spirit.

“What would you like, a Brandy or Whiskey?” one of the Deans asked.
“Both, Sir,” replied Robert ‘Jock’ Craig, the cook of Canterbury Association surveyors.

Mary Tod, an employee of the Deans brothers later writes:

“The place was decorated up for the occasion with green branches and they had one table from one end to the other [in the Deans Cottage]. They got a round of beef from Mr. Deans a fortnight before. It was put into a cask and it was beautiful. They also got a goose and plenty of vegetables. There were two broken-down swells giving speeches, one Bruce [Captain James Bruce – Akaroa publican] and one Fox [Sir William Fox – agent of the New Zealand Company]. So you may guess we had a jolly evening.”

It was on this day that the Deans renamed Putaringamotu to Riccarton after their parish back in Scotland; and requested to rename the Otakaro river to the Avon – after the Avon Waters which flowed beside their grandfather’s property where they had fished as boys.

The Tods (William and Mary) met William Deans in Wellington in 1841. I’m sure one of the reasons they became close was that they were Scottish. Just two years later, William left Wellington to move down to Putaringamotu on the Port Cooper Plains. Wellington had been a disappointment and the Port Cooper Plains held more promise for William’s farming dreams. With him were the Gebbies who were under a two year contract to work for the Deans.

In 1845, when the Gebbies and another Scottish family – the Mansons – completed their contract and moved on to their own farms on Banks Peninsula, the Tods received an invitation to come and work at Putaringamotu. They accepted and arrived on the Plains just before the Gebbies and Mansons left.

By the mid 1850’s the Tods had also moved on from Riccarton; owning their first land close by in Fendalton before moving out to Lincoln where they spent the rest of their lives.