The house built for John Robert Godley, his wife Charlotte and their son, ‘little Arthur’, in Lyttelton, in 1850. Godley was Agent General for the Canterbury Association and a sort of ‘Governor’ for the first two years of the Canterbury settlement.

This watercolour has a fascinating story to it. It was rediscovered in the secret drawer of Charlotte’s personal writing case, in 2005, in England. It is still in pristine condition, no foxing, and has almost certainly lain in that drawer since 1851 or more probably 1852. But who painted it?
I suggest it was Charlotte, herself. Charlotte drew and painted, but not very well, unlike her good friend, FitzGerald, who drew and painted superbly. The perspective in this watercolour is not very good, and ‘perspective’ was one of Charlotte’s shortcomings in drawing.

It is clear that Charlotte treasured the watercolour till her dying day, keeping it so close and so private, all those years (she died in 1907!). Irrespective of its limited technique, the watercolour has immense interest because it is the only known close up of the house, and in colour.

(The house stood at the very beginning of Sumner Road, on the first bend. It is not to be confused with ‘Godley House’ in Diamond Harbour, which has no connection with the Godley family, but rather is so named because it faced towards Godley Head, at the entrance to Lyttelton Harbour). 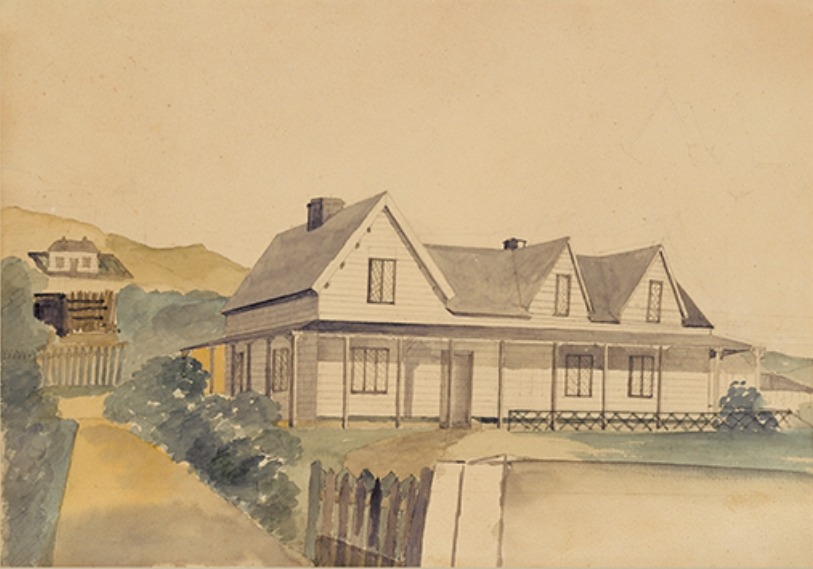