“For the last five years, ever since the plan of founding a settlement of Church People in New Zealand was first suggested to me…the thought of it has hardly been for a moment out of my mind; I have become, for the time at least, a man of one idea, to which everything else, public and private, has been made subordinate.  Almost every intimate friend I have in the world has been induced by me to take part in this enterprise; whatever reputation I may enjoy, or look to enjoying, is bound up with its success; indeed I have often felt as though, if this colony had proved a failure, I could never again have had the heart and courage to engage in any public enterprise”.

On the right hand-side as you drive into the Riccarton Ave car park of Hagley Park (by the tennis courts) sits this historical gem. It was unveiled on the 16th December 1911. It reads: 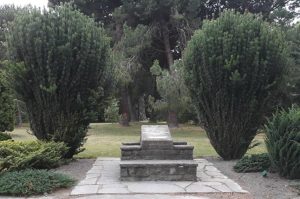 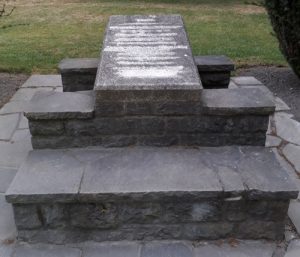 The memorial tablet acknowledges the departure – as the actual spot where they climbed up on their transport to Lyttelton – of John Robert Godley and his family from Christchurch in 1852.
This breakfast event was set up in a spacious marquee, catered by the White Hart Hotel – the first pub/hotel in Christchurch. The Godley’s only lived in New Zealand just over 2 years – some of that time in Wellington. While in Canterbury, they mainly lived in Lyttelton but did live for a while with the Deans at Riccarton.

The Godley’s returned to London where John took up work as a columnist/essayist for a few newspapers – his topic being mostly about colonial reform. He also worked for the War Office. He died in London of Tubercular Consumption, on the 17th November 1861, just a short 11 years after he greeted the First Four Ships at Lyttelton.