Erected in 1898 the Britomart Monument commemorates the raising of the British flag on Green’s Point and convening of a British court of law nearby on 11 August 1840.

The British had sent a warship to keep an eye on the French after hearing of a dubious purchase occurred by Commander of the whaling vessel Cachalot from Akaroa Maori in 1838. From France, sanctioned by King Louis Philippe, Captain Lavaud set sail for Akaroa in April 1840. The Compte de Paris carrying 53 passengers left in May 1840, intent on colonising this new French owned territory.

In the meantime Governor Hobson declared sovereignty over all of New Zealand by Britain with the signing of the Treaty of Waitangi. By the time the French colonists arrived the Union Jack was flying. One can’t but help feel sorry for the French. The British Warship Britomart arrived to keep an eye on them, realised they had not yet arrived and staked a claim on the land themselves just one week before the French Colonists arrived on the Compte de Paris. 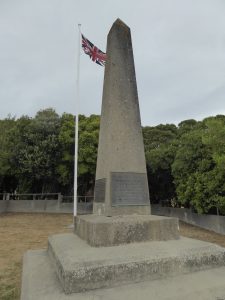 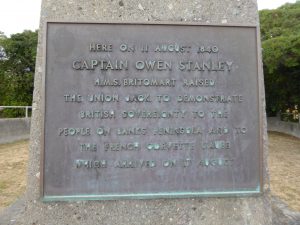 “Here on the 11 August 1840 Captain Owen Stanley, H.M.S. Britomart, raised the Union Jack to demonstrate British sovereignty to the people of Banks Peninsula and to the French corvette l’Aube which arrived on 17 August”