The social gathering of the Canterbury Pilgrims’ and Early Settlers’ Association, annually held on or near Anniversary Day, December 16, took an unusual form this year. It was held on Saturday morning on the bank of the Heathcote river, where a bollard, to mark the site of the old steam wharf where ships tied up in 1856, was unveiled by Mr W. H. Dale, whose father had the ferry on the river in the early days, and who is himself an acknowledged authority on the history of the Canterbury settlement. 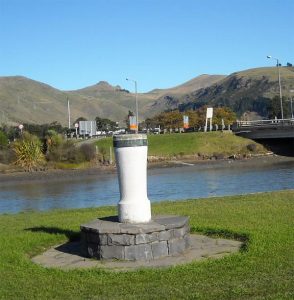 The bollard, standing about six feet high on a two tiered stone platform, is a replica of the bollard or mooring post that stood one at each end of the old wharf. It bears the inscription: “This bollard marks the site of the steam wharf, 1856. Erected by the Canterbury Pilgrims’ Association, December 16, 1940’’.

Mr E R. Webb, president of the association, said that largely through the energy of the late Mr Whitelaw, a member of the committee, the association had marked historic spots in or near Christchurch – the spot where some of the pilgrims had first lived ‘in huts ’ in Hagley Park, the Bricks wharf, and the spot at Lyttelton where the pilgrims had landed.
Now it had erected this bollard to mark the old wharf. He thanked members of the Fleming family for letting the association have the land on which to erect the bollard at a nominal sum – practically it was a gift – the Deputy-Mayor (Mr J. 3. Barnett) for arranging to have the site cleared, and the City Council for agreeing to take over the monument and keep it in order.

Mr Dale, who will be 87 years old next March, gave an interesting address recalling incidents of the early shipping ventures on the Heathcote. The pioneer vessel, he said, was the screw steamer Mullogh, 46 tons, commanded by Captain Simmons, and other early traders were the Gazelle. Novelty, and Waipara. The old wharf, he said, was about 40 feet long with a mooring post at each end and an adjoining warehouse for storing wool, grain, and merchandise. Mr Dale read a list of the tariffs – signed by J. M. Haywood – showing that the freight was.25s a ton for mixed goods from Port Lyttelton to any part of Christchurch, and that from the Heathcote steam wharf to Lyttelton a bale of wool was carried for 6s, a ton of flour for 15s, and a bushel of any kind of grain for 4d.

After Mr Dale declared the bollard unveiled, practically the whole party left the Heathcote for the Summit road, to attend the opening ceremony of the Pioneer Women’s Memorial.